"The 'Sardine Run' is one of the greatest spectacles in the natural world."

South Africa, officially the Republic of South Africa (RSA), is the southernmost country in Africa. It is bounded to the south by 2,798 kilometres (1,739 mi) of coastline that stretches along the South Atlantic and Indian Oceans.  It is a biodiversity hotspot, with unique biomes, plant and animal life.

The convergence of two ocean currents—one warm and one cold—in the shallow waters of the Agulhas bank produces turbulent and unpredictable waters. Warm water arrives from the east on the fast-moving Agulhas current, which flows along the east coast of Africa. Meanwhile, the cooler, slower Benguela current flows north along Africa’s southwestern coast. That means navigating around the tip of South Africa requires mariners to sail against ocean currents on both sides of the continent.

The instability and churning does have one benefit. As water masses stir the ocean, they draw nutrients up from the deep, fertilizing surface waters to create blooms of microscopic, plant-like organisms (phytoplankton) in the open ocean. The phytoplankton feed a robust chain of marine life that makes Agulhas Bank one of the richest fishing grounds in southern Africa.

WHEN DOES THE RUN HAPPEN?

The sardine run starts in the Cape in the autumn of the Southern Hemisphere. Once the sardines have spawned south of Cape Town, they continue to follow the cold currents eastwards along the eastern seashore. As numbers swell, predators begin to follow their migration continually feeding. The peak of the run is when the number of animals is biggest. This build-up usually takes 2 months with peak lasting up to 2 months.

To see it best, you must go diving and join the shoals in the water. The area between Port. St. Johns towards Mboyti is best to witness the event, which is why most operators are in the region of the Transkei during June and July. Though there are some dive operations that have tours further South from Port Elizabeth or even as far as Cape Town.

WHAT IS THE SARDINE RUN?

Billions of sardines’ spawn in the cool waters of the Agulhas Bank and move northward along the east coast of South Africa, preferring the colder water. They swim in shoals to increase their own safety. A single sardine will have difficulty avoiding a larger predator, but together the likelihood of being caught is less.

In terms of biomass, researchers estimate the sardine run could rival East Africa’s great wildebeest migration. However, little is known of the phenomenon. It is believed that the water temperature must drop below 21 °C for the migration to take place. The shoals are clearly visible from spotter planes or from the surface.

The migration is made up of multiple shoals and is one of the greatest marine wonders of the world.

There are no accurate figures on how many sardines make the passage, but huge shoals 30km in length long and 4km wide have been known to hug the coastline as they make their passage. This spectacle is only one part of the phenomenon, it is the chasing group that turn this into one of the world’s greatest events.

Following the shoals are a host of predators, including up to 20,000 common dolphins, thousands of copper sharks, cape fur seals, great white sharks, tens of thousands of Cape gannets and the magnificent Bryde’s Whales. The later will often engulf a shallow bait ball in their entirety. As a baleen whale, the Bryde’s Whale will suck in a massive amount of water and bait fish during a single lunge at a bait ball. Once captured, the whale will then strain out the seawater through the baleen to retain the fish.

Baitballs are formed as dolphins start to round up pockets of sardines using streams of bubbles and trapping them against the ocean's surface. When threatened, sardines instinctively align their bodies with those of their neighbours to prevent themselves from becoming isolated from the group (the best form of defence from predators).

The only weapon of the sardines is to confuse the predators by constantly moving. Their very well-coordinated movements serve a purpose. Sharks are dazzled by the constant change of direction of the sardines, with which the sunlight strikes them differently, and the big ball goes from giving strong flashes of light to becoming completely dark.

These baitballs are short-lived events, lasting no longer than 10 to 20 minutes as marauding predators working together, whipped into a feeding frenzy pick off the sardines.

As the sardines are driven into shallower water, Cape gannets strike. To see hundreds of birds dive-bombing is spectacular. They plunge in formation from heights of almost 30m, hitting the water at 90km/h and reaching depths of 10m or more. A minute or two later, they surface, sardine in mouth, while the frantic bubbles of the dolphins foam the surface of the ocean, amid a thrash of tails and dorsal fins. After the activity has diminished, the satiated gannets float on the surface too full to fly.

END OF THE LINE

When the shoals reach the coast of Durban, they seem to disappear, and no one really knows why. One of the theories is, that having spawned and not eaten the sardines simply die, though theory has not been proven. Some observers state they return south via deeper water making them no longer visible.

When: May to July

The Sardine Run in South Africa is recognized as one of the world’s most spectacular marine events. Annually, from May to July, vast shoals of sardines migrate from their temperate-water home off South Africa’s southern coast and travel north-east into the sub-tropical coastal waters of the Wild Coast. Following the shoals is an unparalleled concentration of marine predators including seabirds; sharks; game fish and marine mammals. Being autumnal, the days on the boats will be cool and a wetsuit is required. You may even be diving with the shark as they also feed. Surfers are also known to end up in the middle of the sardine run!

Higher sea temperatures and overfishing have, for some years, have put a damper on the sardine run. But fortunately, it has not become a permanent problem. The survival of large numbers of sardines, however, is an important prerequisite for the life of many marine species. In South Africa there are fishing quotas but how well these are enforced is questionable, but it continues to be monitored. This moving banquet is something to witness and a worthwhile event to undertake if you love diving, infact this HAS to be on your bucket list. 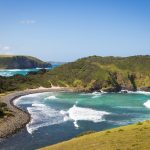 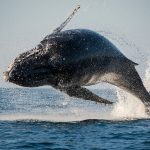 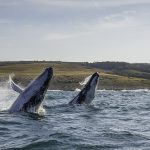 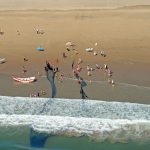 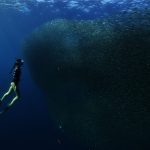 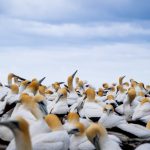