"If thy heart fails thee, climb not at all."

Sir Walter Raleigh was born in 1522 in Devon, moulded by the political landscape he grew up within. He became a famous courtier, soldier, mariner, politician, and writer. Throughout is life he practiced philosophy, advanced mathematics, chemistry, law, medicine and was multilingual, speaking six languages.

During his younger years he had a distinguished military career fighting overseas. Legend tells us that when he laid his cloak across a puddle for Queen Elizabeth I to step across, he quickly become her favoured courtier within the royal circles. He lived a flamboyant lifestyle, was quick witted and never afraid to voice his opinion. During the ‘Era of Discovery’ he was famous for the colonisation of the New World, having never stepped foot on North American soil,  and also for his failed attempts to find the fabled city of El Dorado.

THE POLITICAL LANDSCAPE OF EUROPE

Europe had a very different political landscape back in the Tudor era with religion being one of the governing factors in society. Under Henry VIII England broke away from Catholic Rome starting the English Reformation.

When he died, his eldest daughter Mary became the Queen of England. Her reign was between 1553 – 1558 and she married King Philip II of Spain, bringing England back into the Catholic sphere, but she died suddenly in 1558 without an heir. This meant that Elizabeth I then became Queen and procceeded to champion her father’s cause.

This did not come without its own perils, as King Philip II of Spain was keen to reunite Europe under the Catholic banner and conflict would soon follow in Ireland and the lowlands of Europe.

THE ERA OF DISCOVERY

When Elizabeth I came to the throne, England had no available routes for trading in Africa, Asia, or the New World, and didn't rule over any overseas colonies. The seafaring nations of Europe had already established their own trade routes to Asia, South America and Canada with power and wealth sat in the hands of the Portuguese, Spanish and French. England had not explored beyond its own borders and its treasury lay empty unable to support any such attempts.

Elizabeth I was troubled by the wealth that the Spanish were  accumulating from their South American conquests as part of its mission to unify the Catholic Church. She planned to develop her own trade empire and encouraged her ‘Sea Dogs’ a group of trusted, fearless, loyal independent traders and adventurers  to raid the ships of enemy nations (Spanish) and capture their goods and trading outposts. As these attacks were not performed by the Queen's navy, they were not seen as direct conflict between the Spanish and English. Proceeds from these ventures were then divided between the shipowners, captains and crew with a percentage of the bounty given back to the government and Queens Treasury.

Relationships between Spain and England continued to sour with war finally breaking out in 1585 after the Spanish seized all English boats at dock in Spanish harbours. This would later be inflamed by the beheading of Mary, Queen of Scots in 1587.

Downton Manor was bequeathed to Raleigh in 1583 and was his first grace and favour house. When Elizabeth I came to stay in 1585 he extended the property using timbers from one of his boats. During the visit they discussed her patronage for him to colonise the New World, to find minerals and new wealth, and to use this outpost to raid Spanish shipping lanes.

Raleigh's cause was granted in March 1584, when Elizabeth I gave him a royal warrant for a voyage to North America. He sponsored two expeditions to the New World, the most famous one was the colony of Roanoke in 1587. New plants, most notably potatoes and tobacco were brought back, but no gold. Whilst these expeditions were failures,  lessons were learnt that allowed future attempts to succeed.

Meanwhile, as the English continued to raid the Spanish galleons, word of a mystical city began to spread. In 1595 Sir Walter Raleigh undertook a voyage to Venezuela to look for this city. He travelled up the Orinoco River recording, discovering some gold mines but no fabled city. Whilst he mapped the region, he returned to England empty handed, publishing an exaggerated account of his voyage which only enhanced the fable.

When King James I succeeded the throne in 1603 he was keen to cease all hostilities with Spain, whilst thwarting an attempt to overthrow him. Sir Walter Raleighs enemies falsely accused him of being behind this plot and the King sent him to the Tower of London for 13 years.

In 1616, however, he was released to conduct a second expedition in Spanish held territory to find El Dorado. The King had made it clear that his party was not to attack any Spanish outposts or ships, but as Raleigh lay ill in Trinidad, his expedition leader ransacked the Spanish outpost of San Thomé. Again, he returned to England without any gold. Raleigh was arrested and executed to placate the Spanish on 29th October 1618.

His last words to his executioner were "This is a sharp medicine, but it is a physician for all diseases and miseries. What dost thou fear? Strike, man, strike!"

Whilst Sir Walter Raleigh's endeavours had failed, he managed to capture the interest of the nation in building an overseas empire. Within decades, others would follow in his footsteps and, armed with better information, they would succeed in building England's first permanent colonies.

Today in America he is remembered by the naming of a mountain, a city and county whilst stamps and coins have been made to celebrate his deeds as one of the greatest explorers of his time. 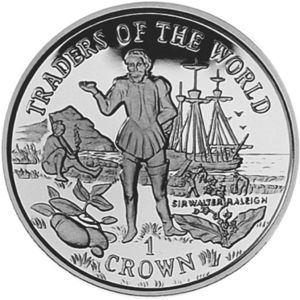