“I like to have a martini, two at the very most –After three I’m under the table,

After four, I’m under my host.”
Dorothy Parker

If you were to ask you to name a classic cocktail, the Martini would most likely be your response. This cocktail has been influenced by some of the greatest politicians, movie stars, artists and businesspeople. It has been on TV and the silver screen and who can forget James Bond ordering the drink in Goldfinger. It uses two ingredients gin or vodka with vermouth. Its background originates from the USA, and it is certainly a pre-prohibition drink though its origins are somewhat disputed.

One theory is that Martini evolved from a cocktail called a Martinez. In the town of Martinez, California, many of the historians and inhabitants of the area claim it was created during the mid-1800’s Gold Rush. Legend has a gold miner went to the local bar to celebrate his good fortune. He asked for a glass of Champagne and learned they didn’t have any. The bartender mixed up a drink with what he had on hand: gin, vermouth, bitters, maraschino liqueur, and a lemon leading to the Martinez. The drink soared in popularity and was published in the Bartender’s Manual in the 1800s.

Another theory claims the drink was invented in San Francisco. A gold miner ordered a pick-me-up drink on his way to the town of Martinez at the 'Occidental Hotel.' The name, through the years, eventually morphed to "Martini."

BACKGROUND TO THE MARTINI

Evolution of the Cocktail

As prohibition kicked in Americans taste switched from whiskey to bathtub spirits (gin), which were quicker and easier to make. The spirit was poor often tasting foul! So, moonshiners masked it with botanicals and sugar to make it more palatable. Two cocktails that became popular doing this period were the Southside and Martini. One using mint and lemon the other Vermouth. As the gin quality began to improve the quantities of sweetners required began to lessen, meaning it became drier for the Martini (less vermouth). This was about to become the new normal due to the war clouds looming over Europe in the late 1930's.

HOW IT BECAME DRY

France and Italy were producing the bulk of the Vermouth used within the Martinis prior to World War II. As war broke out these supplies dwindled forcing the Martini to change its style, towards the drier side.

This preference for a dry Martini (with little to no vermouth) was helped along by prominent cultural figures. Hemingway, famously preferred a "Montgomery Martini." This was 15 parts gin to one part vermouth, a reference to the British General Bernard Montgomery, who'd been commanded in the Second World War to limit British casualties and preserve the empire. He wouldn't join a battle unless he outnumbered the enemy 15 to one.

Winston Churchill was also a fan of the Martini. He quoted "The only way to make a Martini is with ice-cold gin, and a bow in the direction of France."

In 1965, 007 famously ordered his Martini in Goldfinger. Unfortunately, he ordered a "Vodka Martini, shaken, not stirred" and overnight an entire generation started to use Vodka instead of gin, this was a golden bullet that started the decline of gin. 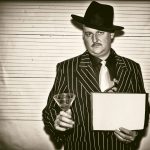 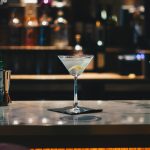 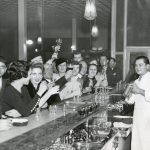 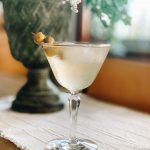 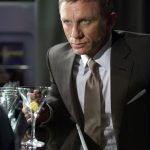 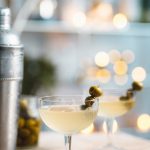 It was the American bartenders that saw Vermouth’s popularity grow through the Prohibition, The Great Depression and World War II eras. Like Gin, the base has a blank canvas that the makers can then apply limitless permutations of wine, spirit and botanicals.

But what is Vermouth?

It is an aromatised wine. The building blocks are wine, spirit, sugar, wormwood and other botanicals which all influence the final flavour. This makes it a versatile partner for cocktail making. As Downton Distillery is situated on a vineyard this is something that we will be looking towards in the future as we too seek to create that perfect Martini!

HOW TO MAKE YOUR PERFECT MARTINI

"It is easier than you think!"

There are two styles of glass that can be used, the Nick & Nora or Martini glasses.

The Nick & Nora have long stems with a high-sided bowl, narrow mouth, and modest capacity, it radiates elegance. This glass was favoured in the 1930s but was replaced by the Martini glass in the 1980s. The Martini glass with its lengthy stem and separated bowl means that the cocktail isn’t warmed up too much by the drinker’s hands, as there’s no added ice to ensure it stays chilled. Try rinsing your glass with Vermouth before pouring your martini into it.

TO STIR OR SHAKE

Most bars will stir your martini and then pour it into a chilled glass. By shaking the martini in a cocktail shaker, the ice will be diluting the spirit altering the texture of the spirit and making it cloudy.

No matter how many flavoured gins, rums, bourbons and flavoured syrups there are, a Martini’s classic ingredients will always dominate in the cocktail game. Not even the latest trends can replace its basic structure. Over the years, Martinis have become one of the best-known mixed drinks. It exudes class, sophistication and elegance. Pretenders will battle for the throne but there is only one King. When you want to celebrate in style head to Dukes Bar in Mayfair and treat yourself, it is worth it.

“I would like to observe the vermouth from across the room while I drink my martini.”