“There is no better tool or equipment you can have on board than a well-trained crew.” Larry Pardey

The Clipper Round the World Yacht Race is a biennial race that takes paying amateur crews on one or more legs of a circumnavigation of the globe in 11 specially designed identical yachts owned by Clipper Ventures. It is the only event of its kind which trains people from all walks of life to become ocean racers. Professional skippers and additional qualified persons (AQPs) lead teams on their 10-month journey. All participants must complete a four-week training course before starting the race.

The race was conceived in 1995 by Sir Robin Knox-Johnston and is run by Clipper Ventures plc. The race has been held every two years since 1996, although in 2004 there was not a race and biennial racing resumed in 2005. In contrast to the now defunct Global Challenge, the Clipper Race route follows the prevailing currents and winds and uses lighter, faster boats. The current fleet of 11 yachts are Clipper 70 yachts that were first used in the 2013–14 race. Previous race fleets were composed of eight Clipper 60s and ten Clipper 68s.

The 2019-20 Clipper Race got underway in September; the 12th edition attracted 688 crew representing 43 nationalities for the 41,000+ nautical mile course. The plan was for the race to finish in 2020 on August 8 in London, but while on course from Australia to China, the Clipper Race Organizing Committee found themselves facing a global pandemic.

Expected to arrive by mid-February 2020, the coronavirus outbreak forced a series of course revisions to avoid the Chinese Ports of Sanya, Zhuhai, and Qindao. But a month later, locked down in the Philippines with nowhere to go, the committee was forced to make an unprecedented decision and postpone the balance of the race. With the race halfway done but stuck in place, the crew was eventually released from quarantine, with the Clipper 70s waiting for the next move.

“When the next wave of COVID-19 hit the world hard, its effect on global travel made a restart this year untenable. On account of the unpredictable restrictions caused by the pandemic, the current edition will now restart from Subic Bay in March 2022. It is important to us that we do our best to deliver the Clipper Race that our crew signed up for, with their safety, as well as the Clipper Race Team and Race Partners, as always, at the forefront,” noted Sir Robin Knox-Johnston.

The final legs this year will see the eleven ocean racing yachts heading to New York, before they race across the North Atlantic to Derry / Londonderry in time for the city's Maritime Festival between 20th -24th July where the sailing fleet is the centre piece. Their final sprint is to London's Royal Docks which is hosting the Race Finish after a gruelling 3 years!

Ha Long Bay the boat Sandra will be crewing on

Sandra has always had an affinity to water, though growing up in the former East Germany her access to the ocean was non-existent. Instead, her journey started with books, sailing and learning how to dive. As the political winds changed, an opportunity appeared in Greece where she built up her skillset teaching open water sports. It was whilst stood on a platform waiting for a tube that she saw an advert calling for adventurers to become ocean racers. Soon afterwards she signed up to the Clipper Race which has taken her in a new direction.

Her journey has involved making sacrifices whilst juggling family with her training. The race brings a group of individuals together who know very little about each other, but as time progresses and their learnings, a functional team begins to appear. Sandra has learnt that

“a wicked sense of humour, a hug from a teammate when spirits are down and some emergency Haribo stuffed into the pockets of your kit, ready to make an appearance, can make the difference between a good or a bad day on the water.”

Being crew member also means taking on multiple roles, navigation, cleaning, mending, sail repair, medic, plumber, electrician and weather forecaster. Once the race has started everyone relies on each other and they must be capable of handling any situation, no matter how severe the conditions are as they pit their wits, skills and courage against the world’s toughest oceans.

Sandra flies out this month (June) to join her team in New York preparing for Leg 8: The Atlantic Homecoming. 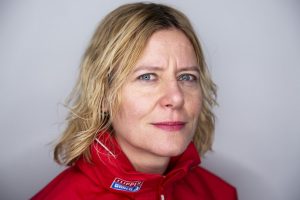 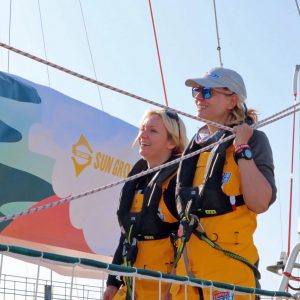 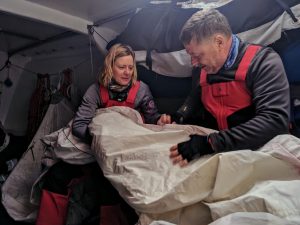 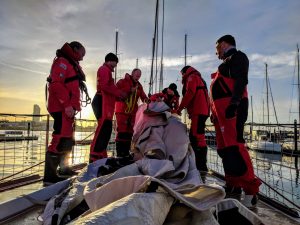 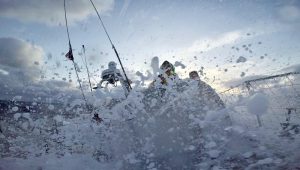 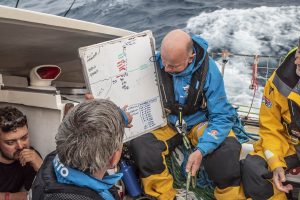 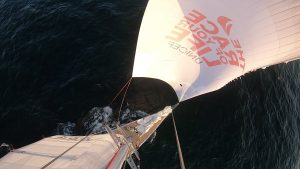 The boat that Sandra is joining is the Na Long Bay sponsored by Vietnam and skippered by Stickland. The youngest member of the team is 27 and the oldest is 73. To date the crew have secured second position within the standings and there is a chance that Sandra’s team could win the next leg and overall race. The final leg consists of three races over 22 days ending at the Royal Docks in London.

There are few adventures that can bring together an international group of strangers where project managers, mothers, grandmothers, students, chief executives and consultants with little sailing experience take on the might of the oceans in the race of their lives. Sandra hopes she can influence a new generation of sailor to take on the challenge. The race provides everything; it’s exciting, uncomfortable, exhilarating and at times frustrating. It’s a challenge without equal.